My Day (and Night) At The Playboy Mansion

Well they are finally here, photos of my trip to California to represent our little group of artists. First off I can not believe I was offered this opportunity but so glad it came my way. It was a difficult thing to do but also a ton of fun and I met so many nice people along the way.

That day started out in a panic for it was 45 minutes before I was to leave for the mansion and I still did not have two of our boxes. Thankfully the post office spared me a severe panic attack and produced them just in the nick of time. I ended up getting the worst taxi driver for my very short ride over to the mansion (my trip was THREE times the amount it was to drive back to my hotel room, hmmm caught on to that fast and didn't tip him.) He assumed I wanted a tour of the stars homes and to see where Michael Jackson lived, sorry dude, so not interested.

I got there around 4pm and things were starting to get set up and two very nice security guards helped me with the boxes, perhaps because I was looking so lost, confused and I might add pathetic. While they were doing me the favor along came this comically grumpy man yelling and screaming toward (not exactly at) me about who I was, why there was a taxi in the driveway (which I am guessing by the amount of people that ran toward it was not a good thing) and none of the information I was telling him meant anything to him. I really could not help but laugh at him because though I knew he was serious there was this "I give up with all these people, grumble, grumble, grumble" quality to him. Off he went flailing his arms muttering away. (he later came up to me and appologized and we had a very pleasant conversation. I was just glad he relaxed though I certainly could understand why he would be so uptight)

I spent a while fixing up our table and getting to know some of the other vendors and the photographer, oh and the handful of peacocks that roam the grounds. ah and I almost forgot, a woman wearing nothing but blue paint, eyelashes and heels. Thankfully she was sitting down by the pool and not standing. It would be a bit difficult talking to someone with their breasts at eye level, well that is unless you were attracted to breasts I suppose. It was hot and I was stuck in a cocktail dress and heels, or as I liken them to tiny little torture chambers, especially since I was standing on uneven flagstone all night. Right in front of me though was the famous grotto (alright, I admit, I didn't know that until I was there and someone told me that was what it was) 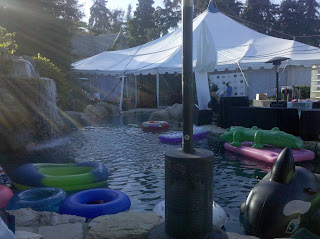 I did not have to wait that long before the guests arrived and I was very excited to see that Apolo Ohno was on the list. I was one that was glued to the tv watching him skate in awe. Just because he was on the list did not mean he would be there but I was hoping he would show.

All of the celebrities walked into our area, only certain ones were allowed in and proceeded to visit each table. I was introduced, shook hands, got a hug or a kiss on the hand or cheek and told them a little about our group. I got to chat with a few of the athletes and celebrities on a more personal level too. For the most part everyone of them was kind to me and seemed interested in our art.

One celebrity that stood out the most to me was Quinton Aaron. I can not say enough kind words about this man. He definitely won the sweetest, most polite celeb of the night award.
Another very pleasant man that I met was Jamal Sharif Anderson. He was kind enough to pose with two of our artist's works. He also happened to be from New Jersey, not too far from where I live. Those two celebs were not the only ones I enjoyed meeting. There was Craig Robinson, Christopher Owens, Hill Harper, Nicholas Gonzales, Nick Barnett, Ryan Mathews, Roger Cross, Russell Westbrook, Takeo Spikes, Willie Gault and quite a few others but as soon as I saw the light blue shirt from across the pool I was a bit gushy and in shear awe. It took forever him to get around to where I was at and then finally... 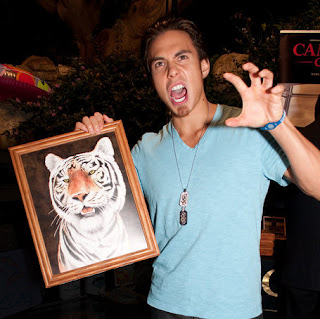 I held my painting back just so he would hold it and he did so making silly tiger faces as the camera snapped his photo. I thank him for being a good sport, he made my night.
Apolo was not the only Olympian to show. I got to meet Lindsey Vonn and Julia Mancuso too (both of whom are super sweet and by the way Julia is also a painter) They were all a real treat to meet and talk with.

The night came to an end just a bit after 2 am. I was tired as it was 5am from my side of the states and my feet hurt all the way up to my knees. I did however get to spend a little time in the party tent and had a bird's eye view the whole time during the meet and greet. 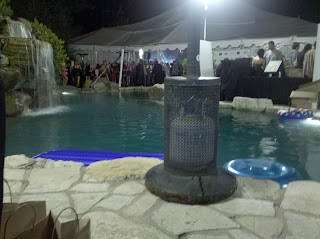 across the grotto into the party 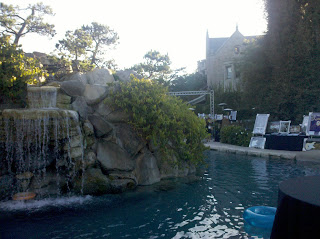 the grotto with the mansion in the back 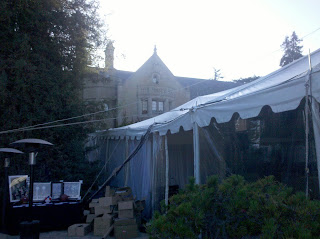 the mansion and party tent

It is time for ICE CREAM!

I once knew someone that would use the phrase "Sew Buttons On Ice Cream" quite often. I was thinking about him the other day and, well this illustration came out.

I know I have been a little bit absent as of late but many things are happening around here, most of them beyond my wildest dreams.

I think perhaps I have mentioned somewhere before that I have been working as a puzzle illustrator and I love my job there. We are getting very close to launching the web page, perhaps it will make it by September. Once Upon A Puzzle is a unique adventure that is quite unlike anything else out there. I can't wait until we get online and you can see all of the neat stuff developing behind the scenes.

In other news (and very BIG news) I will also be taking a trip across country to Beverley Hills and the Playboy Mansion, yup, I typed that right, Playboy and before you get any ideas it has nothing to do with the magazine, trust me I wouldn't sell a one if I were in it. What I will be doing there is representing a handful of artists at the ESPY Awards Gift lounge. It is the first time out for me and I do not know what to expect. I am a bit nervous and a little overwhelmed. (I said yes to doing this and then thought, "What the hell did I just do?") You know, that is ok thiough, it is an opportunity that may never come about again so why not grab a hold and go with it. Thankfully my very good friend's husband lets her out of the attic every once in a while to be my travel buddy (really all I had to say was one word...Disneyland)

So this design will be my last at least for the next two weeks or until things settle down. Wish me luck, I might need it!

.
Posted by 13BlackCatsDesigns at 4:49 PM No comments: