Buy Handmade and Support The Arts 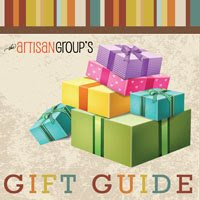 It's that time of year again and what is better than finding that perfect gift for someone you love? Finding that perfect gift from a local artisan.
The Artisan Group has top of the line artists that create an array of wonderful hand-made gifts for just about everyone on your list. Why not head over to their Gift Guide for a small sampling of what they have to offer? It is great to buy handmade, you are not only supporting small independent businesses but giving a high quality gift that was made with great care. Just click the logo above to be taken right to their guide and Happy Shopping!
.
Posted by 13BlackCatsDesigns at 5:23 PM No comments:


For those of you that follow my blog you know that I will be sending this pendant to none other than Zooey Deschanel and I am so happy to do so. My group, The Artisan Group, which I am partnered with Valerie of The Beez Kneez has been in direct contact with a total of four actresses. They will be receiving a bag full of handmade gifts from our members and everyone is busy creating and researching what each actress likes. Would you like to know which actresses will be receiving the other gifts from our members? Make sure you  become a fan on Facebook and you will be the first to find out!

COMING SOON!
Although the above pendants have been spoken for they will soon appear in my Etsy shop. I had to track down and order more of these settings, it wasn't easy but I found a handful and they are coming from a long way away. Stay tuned here and as soon as I get them in my hands I am going to paint them and list them.
Are there any flowers and colors you would like to see first?

We Are So Excited! 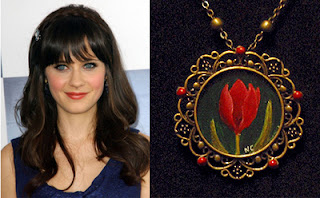 We are so excited to be sending this hand-painted necklace to none other than Zooey Deschanel along with some other gifts from the talented artists of The Artisan Group! Zooey is currently the star of New Girl and is an actress, musician and singer/songwriter. Not only will she be receiving my necklace but also some fabulous stationery, spa products, jewelry and much more from the other artists!

This blog I think will be a difficult one, no, I know it will be. I don't normally allow people to peak into my private life often, or ever really other than rants from a job, how annoyed I am at driving anywhere or maybe a peek into what inspired a painting. Truth is that a lot of my personal life is painful to think about as it is filled with way too much loss on so many levels yet it does not compare to the loss many of our servicemen and women have.
I am not sure why I decided to write this post, well, yes maybe I do but I will get to that in a few.
Above is a photo of my father, Sergeant Nicholas Cutro, 1st Infantry Division - I am afraid I can not remember the Signal Battalion he was stationed with - Vietnam 1964-1965.
I was able to watch The History Channel's program Vietnam yesterday. If my dad was alive today I know we would have watched it together. I get my love of history from him and to this day I have not found someone that would spend hours wandering museums with me reading everything it had to offer. I miss that.
My dad didn't share much about his time in Vietnam and that is understandable. The stories and photos he did share involved friends, boot camp and small stories that did not go into the actual horrors he lived through during his time there and I never asked.
My dad had a very hard life. His mother died when he was only four and his mother's sisters ripped him and my aunt away from their father and separated them. They were also abusive toward him yet my dad always seemed to have a smile on his face, even in the end. He was a first generation American and as soon as he could he volunteered to join the army and enlisted to go to Vietnam.
When my dad came home from service there was no one to pick him up or greet him at the airport and this was before people began to take things out on our service men and woman. When I was watching The History Channel's Vietnam I was moved by the entire program but one thing that was said hit the hardest and in a way inspired this blog. In one segment toward the end Barry Romo had been talking about how proud he was to be returning home in his dress uniform until he reached American soil and found what awaited him, from people the refused to sit near him, to the whispers, points and and shuns. After 40 years, it brought him to tears.
Now comes the reason for writing this blog today. I have swore many years ago, whether I agree with something or not it is irrelevant, that I will never, ever treat a vet the way my father and those that served were treated when they returned home. I would like to take a moment right now to say thank you from the bottom of my heart. Everyone screams freedom at the top of their lungs but not everyone will stand up and fight for it and to you I am grateful.
My dad, whom I miss very much, passed away in October of 2001 from the effects of cancer due to being exposed to Agent Orange while serving his country.
.
Posted by 13BlackCatsDesigns at 11:54 AM 4 comments: