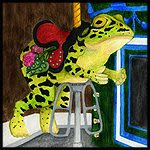 This past Tuesday I took a little day trip to Turtleback Zoo in West Orange NJ, I planned on taking some photos of the animals that live there but to my surprise I happened upon a beautiful carousel of endangered animals. Camera in hand and fingers crossed that the battery would not die before I could finish photographing each piece. I managed to get them in between rides and riders. The work on this carousel was exquisite and each animal unique in it's own right. There was a red panda, gorilla, dolphin, wolf, an otter laying on his back, an okapi, penguin, an elephant, bald eagle, polar bear, sea lion, seahorse, a giant panda, giraffe, ostrich, zebra, crocodile, a donkey and a tree frog. (pictured left) There were also several big cats including a snow leopard, lion, tiger, cougar and leopard. (I think I listed them all) I plan on painting many of the animals that are on this carousel in the upcoming weeks. I also plan on returning to get better photos for reference. The tree frog, I named her Lily, is available on Zazzle as of right now. She will be appearing very soon on CafePress so watch out for her.

to be continued...
Posted by 13BlackCatsDesigns at 10:50 PM No comments: 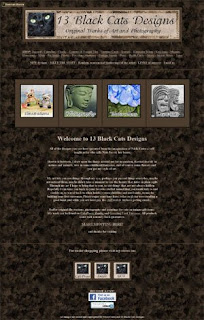 Well I have been working tirelessly trying to get my main website up and running and in a more consistent state. (see a little sneak peek to the left) I am nearly half way through now and still have a way to go. I plan on you being able to shop directly from my website. Hopefully it works out smoothly for everyone, trying to maintain 3 stores into one website is a big job. Hopefully I didn't make it too confusing. All of this redesigning is taking up quite a lot of my time and because of this my artwork has suffered a bit. I do however have a small back log of things just waiting to be scanned in and uploaded. Leave it to me to start a major upheaval on the cusp of the holiday season. It may not seem like it now but Halloween is just around the corner then you sneeze and we are celebrating New Years Eve. I would have liked to do more Samhain designs and I may take a short break from the main site to do this but being an artist I have a tendency to flit about, it gets done just not in a linear way. I have also added some extra features to my site including a look at the staff that works behind the scenes at their jobs and a few links that you may be interested in as well as a section just for new designs so you don't have to go hunting for them.
I guess for now that will be it, I just needed to take a short break and write in non-html format to keep my sanity. Keep an eye out for the new site, hopefully it won't be too much longer.
to be continued...
Posted by 13BlackCatsDesigns at 6:03 PM No comments: 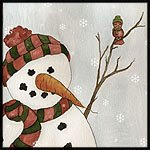 Ok so summer is barely over, kids are just getting back to school and the weather is still warm. Why then would I be working on snowmen? Well it is quite simple really, I love the winter time. I love the cold crisp air, and the way it stings your nose when you take a deep breath. I love the sound your feet make when you crunch through freshly fallen snow, the smell of fire in their fireplaces and most of all I love the quiet. No lawnmowers, no neighbors singing drunken songs into the wee hours of the night, no motorcycles racing up and down the streets and barely any people out and about, nothing but quiet and the songs of a distant chickadee or cardinal. While I am not a big fan of the holidays I do like the solitude of the seasons end, the purity of the white snow. With that in mind I started to design a few snowmen, after all they are easy enough, just a bunch of circles. I wanted to give them a warmness too, something that is not always associated with snow and the winter and a feeling of belonging and friendship. The original paintings you see here were in fact painted in very bright colors and it just didn't seem to convey the feeling I was going for so I scanned them into my computer. After doing this I opened them in Photoshop and copied the layer resulting in two of the same. I applied a sepia cast to the top layer and cut the opacity down to around 40% 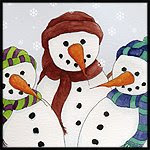 allowing the original bright colors to peek through, much of like any color that peeks through a blanket of snow. I added a few digital snowflakes on a third layer and then flattened it to get the end result. Hopefully what I have is a charming old fashioned painting that conveys the warmth of friends and family and the beauty of the winter season.
For products with this design please visit my store on Zazzle, CafePress or GCU
To be continued...
Posted by 13BlackCatsDesigns at 8:07 AM No comments: