Use this promo code to get these great savings:
ZAZZLEACSALE

I don't know many people that have not been inspired by Alice In Wonderland, there are many movies, games, tv mini series and artwork out there all depicting Alice and her menagerie of characters that travel through Wonderland with her. While watching SyFy channels Alice series I was inspired too, well, sort of.

I have always wanted to design a set of playing cards featuring different fairy tales or animals and I guess the thought hit me the other night. Now most of what has been out there lately has been very dark and goth looking, American McGee's version comes to mind. Now don't get me wrong, I love those versions immensely but since I have been endlessly painting in red, green and white for the holidays I wanted to use color. My mind also tends to live on the dark side of things so that is another reason I shy away from creating darker artwork.

Although people are not a strong point for me to draw or paint I attempted and Alice and Queen of Hearts card. I am not sure why people are so hard for me to depict, perhaps it is because I never really learned or maybe it is just not one of my favorite things to do. I tried to give it an old fashioned card feel, an expressionless face staring off in the distance and I think I achieved that.

I started out making a short list of things that stuck out for me in the story and then cut it down to a few subjects. I lightly sketched the outside of the card with those objects trying to keep Wonderland and Alice's world separate to an extent. I always loved Dinah so I made sure she was in there. The flamingos are a favorite too and of course the Cheshire Cats grin. I tried to fit the Mad Hatter in there but the only thing that made it into the final design was his hat. Add the White Rabbit and his pocket watch, a dancing tea set, and of course the looking glass and I had my outside design.

The harder part was getting Alice and the Queen to align. I drew a grid and that helped but I was having such difficulty with Alice's dress lining up with the Queen's cape so I had no choice but to give Alice a cape too. I thought about making the Queen older but it sort of looked out of place so I made her about Alice's age and I think it worked ok.

This is my first attempt at trying something like this. I would like to do more fairy tales, perhaps I think I might attempt a Mad Hatter/Cheshire Cat card next...hmmm....

.
Posted by 13BlackCatsDesigns at 7:42 PM No comments:

Today I would like to share a charming store with you Miss Myrtie's™ Funny Pet Postcards, Cards & Gifts

Whenever I need a giggle I check in to see what Myrtie and her friends are up to. This delightful store stars Myrtie, a doe-eyed labrador, Bubba and Moses and all of their friends dressed up in cute costumes and ready to make you smile.

What a wonderful gift this would make for a vet, a doctor or nurse. It is also available on several different items like a tote and mousepad. Checkup reminders and business cards are available too.

Meowry Christmas to you. I am sorry, perhaps it is just the silly in me that just loves animals in costumes (even though I do not dare to dress mine for fear of being shredded) All the Christmas cards and gifts in Myrtie's store are precious and the look on the cat's face is priceless

Get Well Soon! by myrtieshuman

This is my favorite. Cindy's (the human that helps Myrtie) imagination is way out there and I am glad it is. Who would have ever thought of this? I know it would cheer me up if I were sick.

Open your heart by myrtieshuman

I think perhaps the most important thing about Cindy's and Myrtie's store is the underlying message. Many of their products call attention to adopting animals and 30% of the profits go to ChildFund for clean water.

Take some time out and visit Myrtie, Bubba, Moses, Cindy and friends and put a smile on your face too.

.
Posted by 13BlackCatsDesigns at 5:26 PM No comments:

The Twelve Days Of Christmas Coupon Codes at Zazzle

The Twelve Days Of Christmas
Coupon Codes at Zazzle

Check out the link above everyday for great deals on Zazzle

.
Posted by 13BlackCatsDesigns at 2:16 PM No comments:

I thought perhaps you would like to see one of my illustrations broken down from concept to completion so I chose the newest one I just finished this morning. It is called Sleigh Ride and it came about because I was thinking of my two favorite comic strips, Peanuts and Calvin And Hobbes and remembering two seperate moments in time, one with my family and one with someone who is still very dear to me.

(I would like to appologize about the quality of the photos, My camera battery was dead and I used my cell phone) 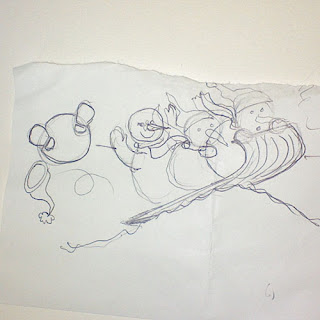 While talking to a friend I began to doodle on a scrap piece of paper in ink. Originally I had them on a sleigh, flat along the ground but I was thinking of Calvin's wonderfully imaginatve situations he would put his snow people in (sans decapitated heads) and I began to draw two snowmen hanging on for dear life while riding down a snowy hill. The third one came about as I glanced at a photo of my family. In it was my sister, my mother, my father and me on Splash Mountain in Disney World (it happens to be the last photo we all took together before my parents passed away) My sister and mother had their eyes squeezed shut in slight terror while my dad and I had the biggest grins on our faces. So in went the snowman, arms up, having the time of his life. It needed a little bit more though and as a kid I always laughed when Snoopy took Linus' blanket away and he would go flying in the air or when Charlie Brown would kick the football and miss (though I never found that funny and Lucy has never been a favorite of mine) So in went this poor little fellow that had the unlucky spot of the back of the sleigh, hats flying and everything. 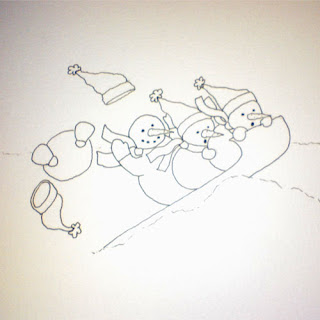 Now came in laying down the blue. I chose Cerulean Blue as it has a bit of green to it and makes a perfect shadow color. One of the most frequent mistakes people make is using black for shadows. If you look at snow or most things in general they cast a shadow and sort of reflect the sky and sometimes perhaps the trees. I am not saying that shadows can never be black however it really depends on what is around your subjects 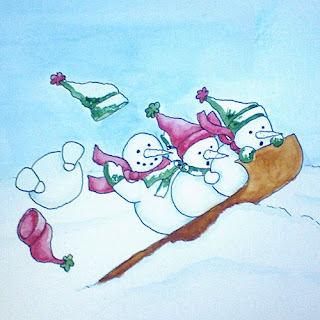 Next step was to start laying down color, What I like to do on occasion is to draw in the shadow areas and bleed them out. This works well for illustrations and I do not always paint this way. 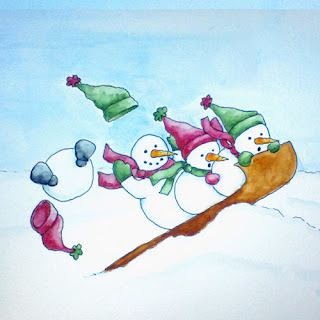 After that I went in and began bleeding the paint with a light wash of color. 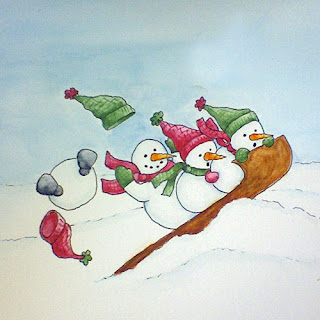 I then added detail and here you have the final illustration. I hope it makes you smile, there are quite a bit of memories in here, maybe you can see some of your own as well. Oh and to my friend, now you know what I am doing when I am talking to you then suddenly go silent for a moment, I am sketching away with tongue slightly hanging out the side of my mouth.

Posted by 13BlackCatsDesigns at 6:58 PM No comments: