Penelope is one of my cats, or should I say I am her human. I wasn't inspired to paint today but out of the corner of my eye I caught Penelope staring at me. Although she does this often (which means she is looking for a way to get on my lap without being noticed) this time I grabbed my pencil and sketched her before she had that chance. I don't normally paint or sketch without a photo because for me it is easier when something doesn't move around. I gave it a try though and it sort of looks like her, not too bad for a first shot.
While I did manage to get the sketch almost completed before she moved in, the remainder of the painting was completed with her purring contentedly on my lap.
to be continued...
Posted by 13BlackCatsDesigns at 7:01 PM No comments: 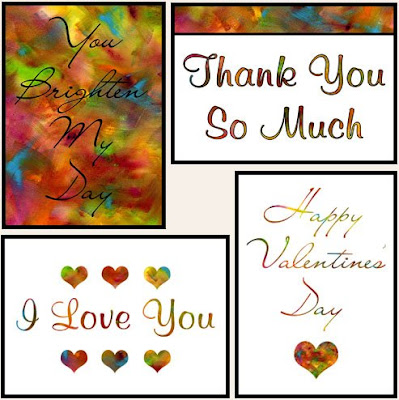 New Watercolor Series just uploaded to Greeting Card Universe. Today I thought I would play with some color and see what came of it. I began with a sheet of watercolor paper and dunked it in water to get it nice and wet. When it was semi dry I picked a handful of colors and directly from the tube I began to put little plops of paint all over the paper. I let the paint sit for a little while to get a bit of a crust on it then with a fine spray bottle I misted the paper and paint and watched the colors run together. Not wanting to have any white of the paper showing through I took a flat 1" paintbrush and helped the colors along, misting with water where needed until I was satisfied. From there, and after it had dried, I scanned the painting in and began to design some cards. For the cards on white backgrounds I simply typed in the sayings and shapes I wanted, selected the type and cut it out of the colored background, added a bit here and there and that was it, a very simple thing. I will probably be adding these designs to Zazzle and CafePress when I get a few more going.

Posted by 13BlackCatsDesigns at 5:23 PM No comments:

Email ThisBlogThis!Share to TwitterShare to FacebookShare to Pinterest
Links to this post
Labels: colors, how to, love, paper greeting cards, rainbow, typography, watercolor 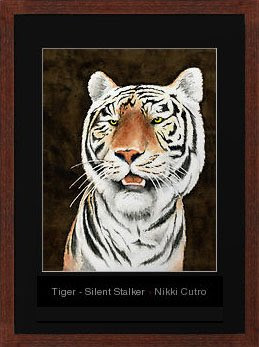 Well sometimes being blocked has it's advantages. Although I have managed to put out a small cow illustration I haven't painted anything really serious in quite some time. Not really knowing what to do with myself today I came across a photograph I took last year of a beautiful female tiger. The best part of the photograph was that there weren't any bars in the way and she was right up against the glass panel looking way across the other side of the enclosure at her sisters playing on the hilltop. I must say it was a once in a lifetime shot second only to photographing this beautiful animal in the wild. Anyway I kind of forgot about it until I was shuffling through some papers today and I was inspired.
I began with a rough sketch on Arches 140lb cold pressed watercolor paper, a paper I reserve for those special paintings because of the cost. When I was satisfied with that I used a small amount of frisket to keep the whiskers from disappearing. I don't like to rely on frisket to often but for this purpose I made an exception. Besides do you know how hard it would be to paint around those whiskers and still have a free brushstroke?
I began to lay in the color by layering light washes, begining with a light ochre and adding burnt sienna as I went along. When I was satisfied with the browns and ochres I began to use an ivory black (Most watercolorists do not use this color for reasons I never quite understood, I however embrace any color I can get my paws on) I started off with a wash of black in the general areas and began shading her fur. When I was ok with what I had I took a break to work on the eyes. Eyes can make or break a painting and I paid close attention to it. Bright yellow was layed in with a small amount of spring green to give them a sparkle only a cat's eye seems to have. A light shading of black to round them and carefully a painted iris leaving the highlight finished them off.
Now the fun part, the stripes. Using a wash of ivory and a relatively thin brush I lightly painted the stripes as if I was holding a pencil and sketching them in. I then softened the edges to make them rest into the fur.
Now the worst part, the background. How I hate this part, what to do? Shall I use the greens of the jungle and soften the background to suggest foliage or should I just keep it simple and compliment the neutrals of the painting so as not to distract the detail I worked so hard on or should I combine the two? At first I thought to combine the two add some olvie and forest greens to the dark sepia tones but as I began to paint I realized that keeping this simple and monotone was the way to go.
So that is how this painting came about. It took me about 2½ hours to complete, the original painting measuring 8x10, twice the size I normally paint. Hopefully you enjoy it.

Silent Stalker can be found on Zazzle, RedBubble, and Greeting Card Universe

to be continued...
Posted by 13BlackCatsDesigns at 7:26 PM No comments: 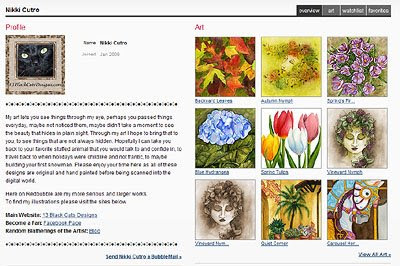 13 Black Cat Designs has finally signed on to Redbubble

In the coming days I will be uploading some of my more serious and larger works to Redbubble, adding this to my already growing list of things to do. I also intend to update my main site and upload a new design I am working on to Greeting Card Universe and Zazzle. I have been having trouble with CafePress with timeout issues and that is why my shop has not been updated in quite some time. Hopefully this will be resolved as soon as I stop getting the runaround from everyone there. As for the new design, it involves a few cows. The new design is actually a painting I painted many years ago in acrylic on a milk can and a lazy susan, I just recreated it in watercolor for my stores. As soon as it is ready I will give you the scoop right here, so come often.

Posted by 13BlackCatsDesigns at 2:43 PM No comments: 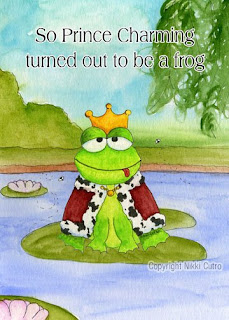 
Inside reads: So let's go get some frogs legs and remember there are plenty of tadpoles in the pond 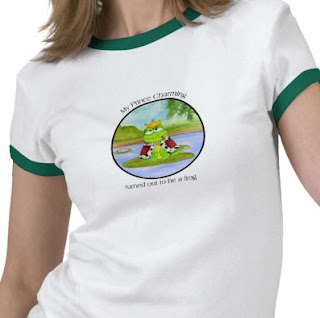 This Design is also avalable on a T-shirt from Zazzle.
Customize it and choose from many types of shirts

Posted by 13BlackCatsDesigns at 4:57 PM No comments: 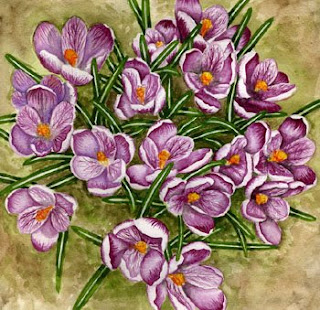 Since I am on the subjects of flowers and Springtime I thought I would give spotlight to "Spring's First Kiss"
It is an older painting I did 2 years ago from a photograph of some crocus growing in my backyard (sans unraked leaves and bits of snow)
The painting itself is bigger than I usually paint, around 9 inches square. I was at a bit of a loss as to what kind of background I should use for this painting since the one that was really there was much to be desired. Backgrounds are not my strong suit and I have to work hard on them, sometimes harder than the actual painting, I can't tell you how many paintings have been tossed aside because I messed up the background. I am definitately detail oriented and find spending hours on a flower much more rewarding than slapping on paint to complete something but it is a necessary evil for who wants an incomplete painting?

I decided to add a blurry dirt/moss background as that is 80% of what my backyard is comprised of (the other 20% is clover) I think it worked well Although if I had to do it again I would have used a deeper brown to make the crocus pop better.

Overall I am pleased with it's outcome and if you would like to purchase this design follow the links:
On Zazzle
On CafePress

to be continued...
Posted by 13BlackCatsDesigns at 7:33 PM No comments: 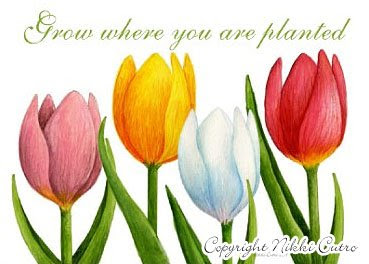 Spring is just around the corner! Ok, well maybe more like down the block and around the corner but it will be here before you know it. I am gladly putting aside the colors of autumn and winter for more vibrant paints and while yesterday was cold, dreary, very wet and windy I gave Spring a little head start. Above is a watercolor of tulips, actually it is four seperate tulips combined into one so I can manipulate it onto various gift items. I painted this time in the style of colored pencils and enjoyed being able to dip into my lesser used colors. I think perhaps I shall paint more flowers this summer.
In the coming days I will be offering it on CafePress. It is available right now on Greeting Card Universe, for Birthdays, Valentine's Day and Easter and Zazzle, for Easter and as is.
I am also working on Easter, Valentine's and a few Anti-Valentine's Day cards and designs so check back often

to be continued...
Posted by 13BlackCatsDesigns at 12:49 PM No comments: 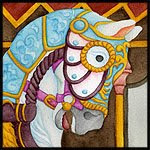 Inspired by the sad puppy dog eyes of my niece...

On Christmas morning my 4 year old niece excitedly gives me the gift she picked out for me. Inside the package is a small cookie tin that plays music and around the outside is a picture of carousel horses. My sister says she thought long and hard over this gift and was quite proud of it. Through a beaming smile on her face she takes it and tells me that these are like the horseys that Aunt Nikki paints, then her sad puppy dog eyes come out and she looks at me and says "Aunt Nikki, could you paint me a picture of a horsey?" So paint her a horsey I did. To the left is Clara, which is for her and Najira, (meaning flower) below, for her little sister.

I actually enjoyed painting these. I don't often use 100% cotton paper because of the cost as I perfer to use better paints. I bought a piece of Arches Cold Pressed Paper simply because it was for my nieces and I want this to last. It is such a pleasure to paint on it, the paints react very differently than normal watercolor paper so it took some time to adjust a bit, it has been a long time since I have painted on cotton paper. It was also nice not having the paper curl up (even though I wet and stretch the regular paper before painting) It is also great for not getting streaks in the paint.
Anyway I will be posting them in the near future to CafePress. They are already available on Zazzle 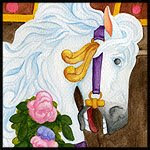 Posted by 13BlackCatsDesigns at 6:07 AM No comments: