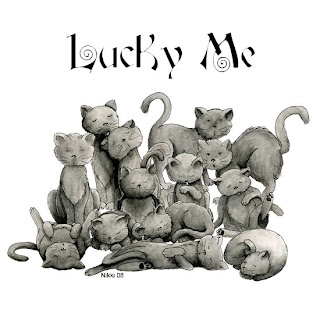 I have always been a cat lover. Cats sometimes get a bad rap for being aloof, self-absorbed and uncongenial. Perhaps what draws me to them is not the coldness some people seem to think they portray but the inner kindness and regality.

Anyone who has a cat that owns them can tell you they can be as affectionate, loyal and loving as any dog. Having suffered from severe clinical depression for the past few years of my life I can tell you they have pulled me out of some very dark places. Always by my side and understanding even without saying a word. I owe a lot to them. You are blessed if you are loved by a cat

Their lines are sleek and their demeanor mysterious. It is no wonder that cats have inspired great works of literature, art, songs and poetry. It is no exception in my work either. Having 6 cats I am never at a loss for subjects even if I am not in need of one they manage to make themselves known.
Posted by 13BlackCatsDesigns at 7:10 PM No comments: 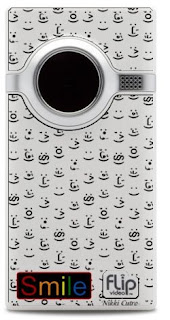 "Making and sharing great video has never been easier. Or more fun. The ultra-thin & pocket-sized Flip Video Mino camcorder has a handy USB arm that flips out and hooks up to your PC or Mac. This charges the battery, plus lets you use its built-in software to easily view, edit, and upload video and photos to favorite sharing sites."
I have to say I have had a lot of fun designing for this camera. I must admit I have never heard of a Flip Mino until CafePress added it to the line-up. Yeah I know I am a photographer and yes I was asleep on this one. In my defense though I don't normally use video.
I found it easy to adapt some of my designs to the camera but as I was doing so I began to feel a little creative. It was nice since I have been a little dry for inspriation as of late.
I came up with this design while doing one that follows some of my thank you cards, saying the word smile in different languages. I scrapped that one temporarily when I started doing an emoticon for a smiley face. This prompted me to go into the Character Map and see what little characters I could use for noses, eyes, mouths and any other facial features I could find. I actually had a lot of fun creating the little guys to the left and who wouldn't smile looking at them?
This Flip Mino Camera along with others can be found for $179.99 in my CafePress Store
On another note though I still have a long way to go to get all of my websites up to speed and complete, after all it is a very big job but it was nice to take a break and do some silly little designs for a fun little camera.

to be continued...
Posted by 13BlackCatsDesigns at 5:45 PM No comments: 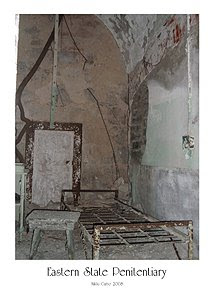 Eastern State Penitentiary, a place I have wanted to tour for a long time. I finally got that chance the past weekend and it did not disappoint. While some may find this place creepy and forboding I however saw a beauty in it. While I am aware that it was a prison and it housed people in some extreme conditions I found myself at peace there. I was fortunate that there was not a lot of people touring it at the time and I was able to stand there and just listen. The busy street outside deafened by the towering medieval walls and only the sound of the wind and an occasional bird singing their song could be heard. The building itself has been left to disintergrate before the restoration and much is still that way, yet in that decay there is life. The picture to the left was taken through a very small crack between one of the cell doors and the wall. I was not able to see inside for myself and mearly stuck my hand and camera through a crack to take this photo. To my eye it was pitch black inside but to the camera's flash this was exposed. Even in a dark dank recees of this building life struggles and grows. Along the back wall and a bit to my surprise is a tree growing through the back wall, taking root and flourishing. The cell itself has been stopped in time for who knows how many years. This may be the first time someone like me has seen inside for what may seem an eternity and I wonder who it was that spent their time here, not able to see or talk to anyone for years. Their only light was a small skylight in the ceiling and their only fresh air was given an hour a day. What brought them there and how did they cope? So many questions and no answers. I took many pictures that day and wondered what the place looked like as it was being built and new, filled with people sent there to repent. I tried to listen for those voices that resonate through the hallways when no one is around and the ghosts of times past. If you are ever in Philadelphia take some time to visit this wonderful place, hopefully you will be able to walk the grounds alone in quiet to get a sense of how small we really are and how lucky we are to walk out the front door.

to be continued...
Posted by 13BlackCatsDesigns at 1:39 PM No comments: 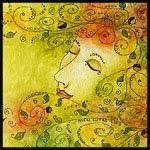 Ah, the cold crisp autumn air signals nature to ready for a long slumber, so may you gather those around you close and celebrate all that the harvest has to offer.

Always my favourite time of the year, a time when the dreadful heat of the summer is gone, the air turns cooler and carries with it the smell of apples and fires in fireplaces and things begin to become quiet. While I love the summer flowers and the color they provide, there is just something spectacular about the autumn leaves and the warmness they exude. Taking drives up Route 78 and stopping every so often to take in the beauty. Although the time is short for such splendors they are greatly appreciated and cherished.
to be continued...
Posted by 13BlackCatsDesigns at 12:41 AM No comments: