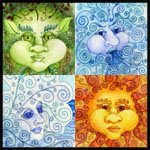 I came up with these designs around Earth Day 2008. Originally I wanted to design a series of greeting cards for the zodiac using their elemental counterparts. Being inspired by nature I began to imagine what they would be like if they had actual entities behind them. Around this time I was going through a "swirl" drawing period. It was just something I was doodling at the time and it seemed to fit what I had in mind so I grabbed my pencils and watercolors and headed outside to channel some nature. The designs came pretty easy once I got going. I wanted to keep them semi monochromatic, which I was successful at and I wanted the viewer to feel the warmth of the sun, the salty water, the slight breeze and the coolness of the forest. I think at least I hope that the viewer can.

Upon the success of these cards and the interest generated by them I expanded the line to include other products on Zazzle and CafePress. I hope to include them on skateboards in the near future and actually design a different version as well as work on a celestial line involving the moon, stars and sun.