Pin It
Ok, I am sorry this has been a little behind but we had the rare occasion of back to back shows. Only two days after I landed home from LA I had to turn around and head to Utah for Sundance. (more on that in later installments)
Well everything went off without a hitch the next morning and we were the first to arrive in our room so we had a chance to walk around to meet other vendors.
The first celebrity we met was Naveen Andrews. Val and I are such big LOST fans that it was a real treat. Naveen is a very soft spoken man, at least he was to us. We chatted for a minute or two and then he took a photo with one of our artist's paintings. Then he told me something that made me happy but I will get to that a little bit later.
The good thing was that The George Lopez Foundation was next to our table so even if certain celebrities did not walk around being gifted we at least got to see them. There were a few that stopped by only to do that. Katey Sagal, Jesse McCartney and Joe Montegna were a few that were there to only sign the guitar.
I guess I could pick a few of the names I met during the next two days and tell you a little bit about them since the event is such a fast paced blur. I have my list in front of me of who was scheduled to be there. Not all of them showed but I will try to remember the best I can.

Billy Gibbons: Both Billy and his lovely wife Gilligan arrived in the back way behind our table (there was as sliding door that we were next to) I needed no introduction and held out my hand to shake his. I talked to them for a little while. He was drawn to my handmade coffin jewelry box and I was rather intrigued by the mass amounts of skeleton keys hanging around his neck. I will be sending him a print of one of my versions of a skeleton key.
Chelsea Traille: Got the best dressed award in my opinion and what a beautiful woman. She took a liking to my carousel horse pendant and chose that to hold for a photo. It is quite an honor when someone chooses your work and admires it.
﻿ 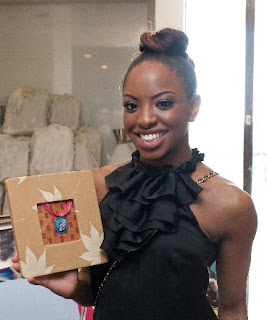 ﻿
Katherine O'Hara: A funny, funny woman, I always enjoyed her work and was honored that she liked mine. I was actually surprised that she chose my coffin to be photographed with but she really liked it. 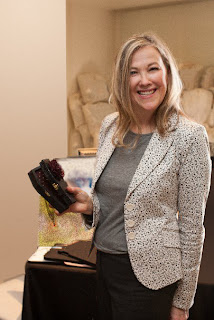 ﻿
Michael Clark Duncan: We had a great conversation about cats. He loves them and has a few and I rescue them and have many. He was drawn to Debbie's iPad cover and that is what started the conversation. I told him that "The Green Mile" made me cry. I said I was only able to watch it once and he said the same thing.

Grey Damon: Instead of posing with our artwork Grey decided to take a photo with the both of us and pulled us in. That is me in the red and Valerie in the pink

and last but not least (the thing Naveen told me about that made me happy): My favorite character from LOST...Terry O'Quinn. He came in from the back door behind our table as opposed to the regular door. I was on the other side of the table bending down with the bags when I looked up to tell Val something, as I did that Terry came in from behind her and I let out a gasp. I apologized for reacting that way but he really caught me off guard. Thankfully he was laughing at me and very sweet. He took some time to chat with us too and told us about a new show he is going to be in.
﻿ ﻿ 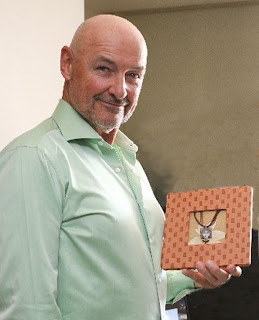 Posted by 13BlackCatsDesigns at 3:20 PM