My Time At The Sundance Film Festival 2011

Pin It
Well we actually arrived a day early and woke up to find that we had nothing to do for the day. A quick trip to the hotel lobby and all the rack cards gave us some direction. We would head out to Antelope Island to see some bison and well, antelope. The drive out there was of course stunning aand we made our way across the miles long bridge to the island. Antelope Island is surrounded by a lake so rich in salt you can not sink and the only thing that survives in it are brine shrimp. We were met by a rather playful magpie that gave us a game of tag as we attempted to take his photo. We drove around the island for a while, saw bison, antelope and mountain goats.
﻿

The next day began among some beautiful scenery. The Montage resort of Deer Valley Utah held our gift lounge for the Sundance Film Festival. It is perched high on top a mountain and the road ends right at the hotel.
﻿
﻿

Set up was pretty smooth and we were put in the corner (which works for us since we could put the art up against the wall on the chair railing) A delicious spread of fruits, cheese and breads were conveniently set up in the middle of the room, oh and some to-die-for Tomato Hummus.
﻿
﻿﻿ 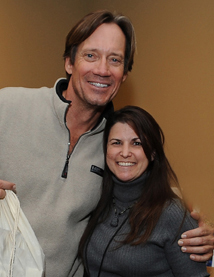 ﻿
One of the first celebrities to enter was Kevin Sorbo. Now you all know how big of a sci-fi geek I am and his show was one of my favorites. He actually chatted with me for a while and wanted to take a photo with me (which of course I was not going to say no to) I thought it was very nice of him.
This lounge was very different this time. It was more for the Turner execs than anything else but I must say we were very well received by them. Apparently word got around and some of the execs came looking for us. That was very cool. I did manage to give out information on some of our artists when asked and one of them walked away with two of my necklaces which I happily gave to her. She said they were for her daughters but joked that they could borrow them from her. I don't mind, I was just glad she liked them so much.
We ended up finishing up early and decided to go downstairs to Daly's Pub. I had the best veggie burger on the planet, Long grain jasmine rice with mushrooms and zucchini diced in, topped with alfalfa sprouts and avocado on a toasted bun. I wish it was not so far away because I really would like one now.
After the first night we were offered tickets to see one of Sundance's movies. Never one to miss an opportunity like this I decided to grab them and enjoy. I picked the tickets by time and had no idea what the movie was about. We headed down into town and found the theater and waited in line for it to open. The movie we were about to see was called "Kaboom" and um, well it was certainly different. I got a few laughs out of it but I can say it was nothing like I thought it was going to be. I had fun regardless and it was more of an experience than anything else.
﻿
﻿

The next day was similar to the day before. mostly execs and few celebs which made my job very hard. I did manage to rotate the art so at least everything got into a shot. A few celebs did not have time to pose and the photographer decided to snap a few of me talking to them. Unfortunately it was snowing and everyone was more interested in skiing than they were in the gift lounge. Only a handful of celebrities showed during our stay, Luckily Chaske Spencer was nice enough to hold two members artwork and the band One Rebublic each held something.
All was not lost though, we made a few good connections for our artists, picked up a couple of new talent, got to see a Sundance movie and had some great food with a few laughs.
.﻿
Posted by 13BlackCatsDesigns at 9:09 PM